A HERITAGE OF CRAFT

A DASH OF EXPERIMENTALISM

Drawing on the innovations of the past to inspire creations of the future, the Rebel City Distillery Series, are experimental small-batch spirits in limited numbers. The spirits crated here are borne through a process of alchemy and artistry

Situated in Cork’s historic docklands we source our ingredients from across the globe to celebrate unexpected connections and cultural vibrancy – the hallmark of the world’s great port cities. We are launching the series with absinthe. Shop here. – Absinthe Made in Ireland

Our Absinthe is distilled on-site in small batches and has handwritten, authentic labels. It was created using a base recipe that our Master Distiller, Robert, discovered in a French book dated 1871.

Blended with grande wormwood, green anise, and florence fennel, the Rebel City Distillery Series Absinthe pours clear and the signature serve of Absinth and iced water transforms it from crystal clear to a semi-opaque white. 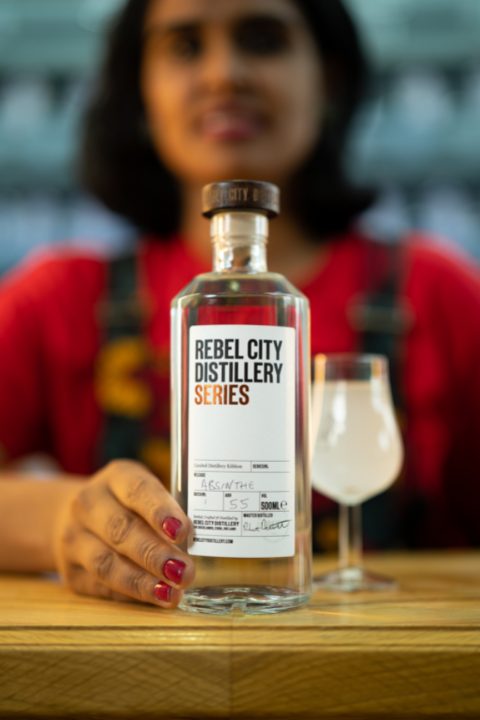 Pours clear but the addition of water transforms it from crystal clear to a semi opaque white.

Anise comes through with a balance of slight bitterness from the wormwood. THE HISTORY OF ABSINTHE

It’s believed absinthe originated in Switzerland in the late eighteenth century, however, it rose to prominence in France in the late nineteenth century. It was the drink of choice of Parisian artists and writers.

A campaign of demonisation by the wine trade, that included spurious claims linking it to violent crimes and social disorder, lead to the banning of absinthe in a number of countries around the turn of the 20th century.

Towards the end the 20th century, an absinthe resurgence began.  From there absinthe has grown in popularity across the world as bans have been slowly lifted. Absinthe is just the first in a line of releases from the Rebel City Distillery Series. Underpinned by alchemy and Artistry – Science and Craft – we will soon be distilling cutting-edge Irish spirits with a global perspective.

The spirits we create here are borne of this rich Leeside heritage; we source our ingredients from across the globe to celebrate and reflect the unexpected connections and cultural vibrancy that have always been the hallmark of the world’s great port cities.

This website uses cookies to improve your experience while you navigate through the website. Out of these cookies, the cookies that are categorized as necessary are stored on your browser as they are essential for the working of basic functionalities of the website. We also use third-party cookies that help us analyze and understand how you use this website. These cookies will be stored in your browser only with your consent. You also have the option to opt-out of these cookies. But opting out of some of these cookies may have an effect on your browsing experience.
Necessary Always Enabled
Necessary cookies are absolutely essential for the website to function properly. This category only includes cookies that ensures basic functionalities and security features of the website. These cookies do not store any personal information.
Non-necessary
Any cookies that may not be particularly necessary for the website to function and is used specifically to collect user personal data via analytics, ads, other embedded contents are termed as non-necessary cookies. It is mandatory to procure user consent prior to running these cookies on your website.
SAVE & ACCEPT
0